2A: Levels of Comprehension

The Levels of Comprehension model provides a straightforward system for evaluating comprehension in a foreign language. We created it to provide clear and specific instruction regarding the language learning process, as well as to give learners a robust framework for thinking and talking about their progress.

The model splits the spectrum of comprehension into six levels, ranging from complete beginner to effortless mastery. The model applies equally to both listening and reading.

The model doesn’t describe your understanding of an entire language as a whole, but rather how much you understand when consuming a specific piece of content.

When using the model, base your evaluation on how much you understand without looking up definitions or reading translations.

Most immersion learners rely on a percentage-based system when evaluating comprehension. We actively decided against defining levels in terms of percentages. It’s extremely difficult to define exactly what understanding a given percentage means. Does “30% comprehension” mean understanding 30% of the words, 30% of the general meaning, or 30% of the full nuance that a native would grasp? Everyone has a different interpretation. Instead, we based the model around the amount of meaning you understood.

It’s completely normal for your comprehension to vary greatly from day-to-day or even hour-to-hour. It can even vary from episode to episode within the same TV show. Comprehension is affected by many factors, including your mood, energy level, and engagement in the content you’re consuming.

It’s also normal to occasionally feel like your comprehension has suddenly gotten worse. This is an illusion. As your comprehension increases, you become more aware of what you still don’t understand. This increased awareness of your ignorance is what causes the subjective experience of losing comprehension. It’s actually a good sign, not a bad one! 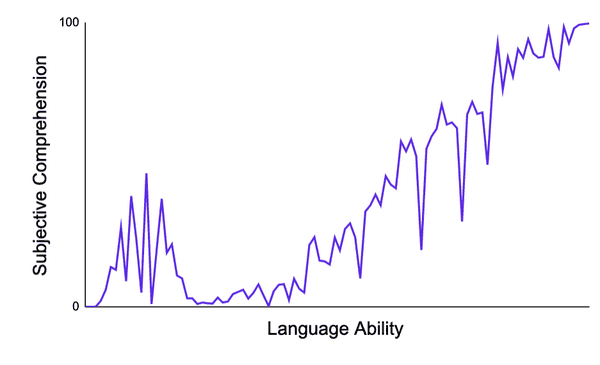 You’ve just started immersing and the language is complete gibberish.

The language is still mostly gibberish, but it has started to look/sound familiar. You’ve gained the ability to pick out occasional words.

You still have no idea what is being talked about.

You can recognize one or two words in most sentences, and every once in a while you understand an entire sentence.

You have an extremely vague sense of what sorts of things are being talked about.

You can recognize at least half of the words being used, and it’s not uncommon for you to fully understand entire sentences.

You’re able to follow along with most of the main ideas that are expressed, but many smaller details are lost.

You can follow along with the majority of the ideas being expressed, but some details are lost here and there.

You can understand close to everything, but some subtle nuance is lost. You have no trouble following along with everything that’s said, but some of the cleverness or craftsmanship of a speaker or writer may go unnoticed.

When you don’t understand something, you can usually identify the cause and clarify your understanding by looking up what you missed.

At this level, there is still significant effort associated with the act of comprehending the language.

You can effortlessly understand virtually everything. Virtually no details are lost. Can fully pick up on the subtlest levels of nuance.

This is the experience that native speakers have when consuming content they’re familiar with.

Here is the first paragraph of Harry Potter and the Sorcerer’s Stone:

Below, we demonstrate what each level would feel like if you were an English learner trying to read Harry Potter.

Unknown words have been replaced with gibberish. Other words and phrases have been swapped out with similar English words to represent when the learner knows the word but isn’t able to grasp its usage in the specific context. We've marked these with a "*".

You recognize some individual words such as “and”, “to”, “were”, and “thank you”, but you don’t have the slightest idea what the paragraph is about.

You understand around half of the individual words. This allows you to glean that the paragraph seems to be talking about a group of people.

Mr. and Mrs. Dursley, of letter four, Privet Move, were proud to say that they were perfectly normal, *I show you gratitude. They were the final people you’d expect to be involved in anything strange or writuence, because they just didn’t *carry with such disgushese.

There are two words you’ve never seen before. You don’t understand what “number four, Privet Drive” is because you think that “drive” means “to move a car”. You know what “thank you very much” means but you’ve interpreted it as “I show you gratitude”, so you’re confused as to why it’s being used in this context. You know the word “last” means “final”, but you can’t make sense of this particular usage. Same with “hold” and "carry". Nevertheless, you’re able to infer from context that the sentence is likely saying that the Dursleys are not strange.

Mr. and Mrs. Dursley, of number four, Privet Drive, were proud to say that they were perfectly normal, *I show you gratitude. They were the last people you’d expect to be involved in anything strange or writuence, because they just didn’t *carry with such nonsense.

There is only one word you don’t know. You understand that the paragraph is talking about two people named “Mr. and Mrs. Dursley”, who feel strongly about being “normal”, and perhaps even have a dislike for people who are “not normal”.

You’re still confused about what “thank you very much” is doing at the end of the first sentence. You aren’t familiar with the particular usage of “hold” in the second sentence, but you can infer from context that it probably means something along the lines of, “they don’t put up with such nonsense”.

There are no unknown words and you understand exactly what the core meaning of the paragraph is.

By this point, you are only missing out on nuance. You have a general sense of what “thank you very much” means in this context, but you don’t fully grasp that the tone conveys that the Dursleys are proud and obstinate people. You understand that “you’d” means “you would”, but you’re unable to perceive how this use of a contraction subtly changes the feel of the sentence. You also don’t pick up on the subtle way that “just” adds emphasis in the last sentence.

You need to think about these subtleties and nuances, but native speakers perceive them automatically and instinctively.

You effortlessly understand the paragraph and automatically perceive all of its nuances and subtleties. You are effectively understanding at a native level.