Language is a tool that we use to understand the world around us. Each language is its own paradigm: a lens through which we see the world. When you first start learning a language, the natural inclination is to translate between your native language (NL) and target language (TL) because you have only ever seen the world through one lens. Unfortunately, if you attempt to force your TL to fit into the paradigm of your NL, big parts of the TL will get distorted in the process. To be truly fluent, you need to build a new paradigm for your TL.

Using a bilingual dictionary is a great tool when you first start learning a language because it uses your NL paradigm as a scaffolding for learning your TL. This scaffolding accelerates your comprehension. Unfortunately, it also tangles the two languages together and distorts the meaning of your TL.

Immersion alone is enough to untangle the languages and build this new mental paradigm, but you can accelerate the process by adopting a native (monolingual) dictionary as your primary reference guide for the language.

Building this new mental paradigm unlocks the ability to think in your TL. When you learn new words and concepts, you associate them with other TL words and concepts rather than associating them with your NL. This allows you to describe a TL concept using your TL. As an added benefit, reading a monolingual dictionary is a form of active immersion and allows you to accumulate additional time in your TL.

By forming this new mental paradigm early, you will dramatically accelerate your journey to fluency.

When to Start the Transition

The monolingual transition is more difficult for some languages than others. For related languages, the transition is pretty easy and only takes 1-2 months. For these languages, we recommend making this shift towards the end of Stage 2B. The gradual transition guide we’ve provided below should be sufficient to make the switch.

For more distant languages, we recommend waiting until Stage 2C. Trying to use the monolingual dictionary before you have a solid foundation in the language is too overwhelming. By waiting, you will make the transition much easier.

If you try the gradual approach below and it doesn’t work for you, wait until Stage 2C where we’ve provided a more structured tutorial.

The monolingual transition is a gradual process. You don't need to move 100% to the monolingual dictionary overnight (or ever, really).

When you start using a monolingual dictionary, it will take extra energy. If you find the process too draining, then revert to only using the bilingual dictionary until you have more mental energy.

Many words have multiple meanings. Try to identify which definition is relevant to the sentence you are trying to understand.

If there are unknown words in the definition, then create cards for them.

Here's a sample Anki deck with an example card type that uses the summary tag to create hidden sections:

This is what the hidden sections look like when collapsed: 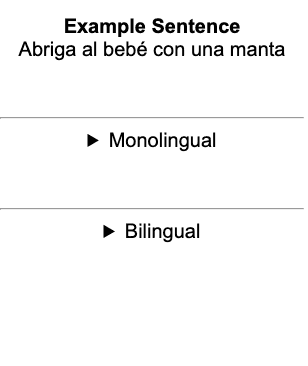 Here, the hidden sections are expanded: 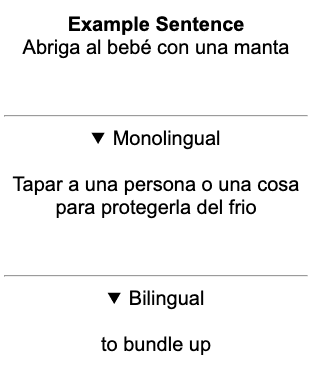 When Not to Go Monolingual

Certain categories of words have disproportionately complex and convoluted monolingual definitions. It’s best to revert to the bilingual dictionary for these types of words.

It may seem counterintuitive at first, but very simple words often have complex and abstract meanings.

Thing: an object or entity not precisely designated or capable of being designated.

The: used as a function word to indicate that a following noun or noun equivalent is definite or has been previously specified by context or by circumstance.

Additionally, simple and common words can sometimes have twenty, slightly different definitions. It’s best to just use a bilingual dictionary for these words.

Concrete nouns refer to objects that you can experience through touch, taste, and smell. The alternative is abstract nouns that describe certain ideas.

You’ve likely experienced most concrete nouns and just need to associate the TL word with that experience. Some concrete nouns have very technical or abstract definitions that don’t help you make the connection to your experience.

Piano: a musical instrument having steel wire strings that sound when struck by felt-covered hammers operated from a keyboard.

Camera: a device that consists of a lightproof chamber with an aperture fitted with a lens and a shutter through which the image of an object is projected onto a surface for recording (as on a photosensitive film or an electronic sensor) or for translation into electrical impulses (as for television broadcast).

If you find a definition that is overly technical and abstract, don’t use it. It just complicates things. Instead, see if you can use an image instead. If the target word is a place, color, species of plant or animal, or any kind of physical object, then an image is going to be more valuable than a definition.

If an image isn’t possible, then just use the bilingual definition.

For academic or technical vocabulary, you can rely on the bilingual dictionary. These words have standardized technical meanings across languages, so you won’t be losing any information by using a bilingual definition.

In fact, for technical terminology, we recommend making clear associations between your NL and TL because it helps transfer technical knowledge between the languages.

For example, the word “hydrogen” means the same thing as the French word “hydrogène” and the Japanese word “水素” (suiso).

If you already know what “hydrogen” means in English, then there’s no need to learn your target language’s word for “hydrogen” through the monolingual dictionary. Simply associate the English word “hydrogen” with the corresponding word in your TL.