The most highly optimized Spanish vocabulary tool ever created.

The ES1K vocabulary deck will skyrocket your comprehension of native Spanish. Combined with grammar study and immersion, you can learn to understand real Spanish in just 100 days.

Beyond the word selection described above, there are two major features that set the ES1K deck apart from other vocabulary tools you'll see on the internet.

Knowing 88% of the words does not mean that you'll understand 88% of the sentences. Here's 88% of the first paragraph of Harry Potter.

Can you understand that? I can't.

If you want to truly understand a language then 1000 words isn't enough. You need to know 99% of the words. For casual conversation, that's about 5,000 words. That may seem like a daunting task, but I've got some good news for you: if you know English, then you have a HUGE head start.

Spanish and English share a lot of words. These are called “cognates” and you don't need to learn them. In fact, of the top 5,000 words used in Spanish, 2700 of them are cognates and another 1000 of them are derived from other common words.

That means you only need to learn 1300 words to reach that 5000-word mark and understand REAL Spanish conversation.

How do we know all this?

Because we painstakingly analyzed and categorized all of these words by hand.

We've trimmed down that 5000-word list to the most important 1000 words so that you can understand REAL, native Spanish conversation in just 100 days.

Each card comes with an example sentence that is designed to maximize your comprehension of native media. We don't dumb down the examples and we don't use silly sentences like Duolingo. We've chosen full and sophisticated example sentences that you will actually hear in real life.

Plus, each sentence reuses previously learned words so that you see dozens of examples of each word in context.

One of the hardest parts of learning a second language is training your ear to hear the language. Authentic native audio is key to practicing your listening ability so we've hired a native Spanish speaker to record high-quality audio for every word and sentence.

Unlike other vocabulary tools, we don't slow the audio down to make it easier. If you want to understand native Spanish, then you need to practice listening to native Spanish. No amount of "Slow Spanish" will prepare you for the real world.

Is ES1K right for me?

We're not going to lie to you, learning a language is hard. It takes a lot of time, energy, and dedication. Not everyone is ready to make that investment and that's OK!

But if you're ready to take your learning seriously, then ES1K is the perfect tool to accelerate your progress. 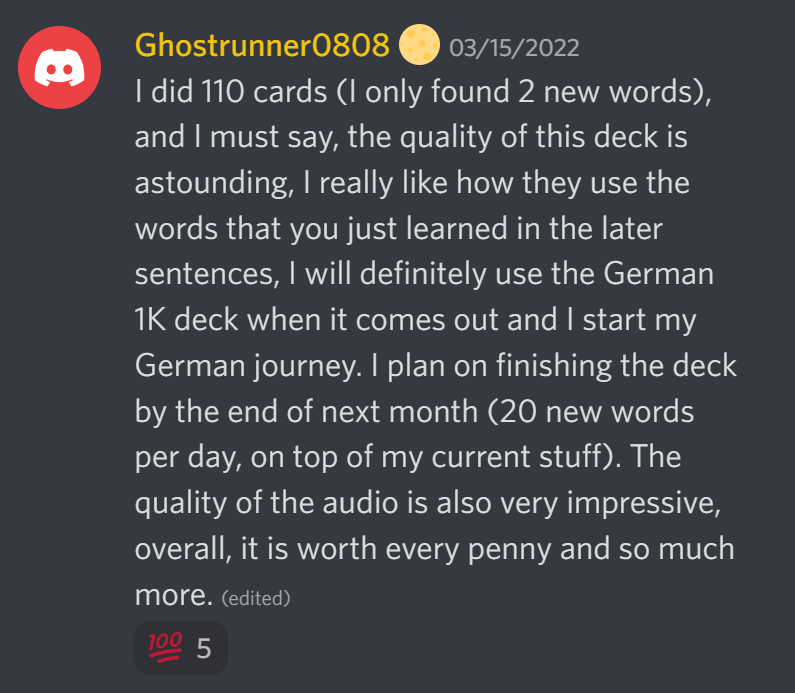 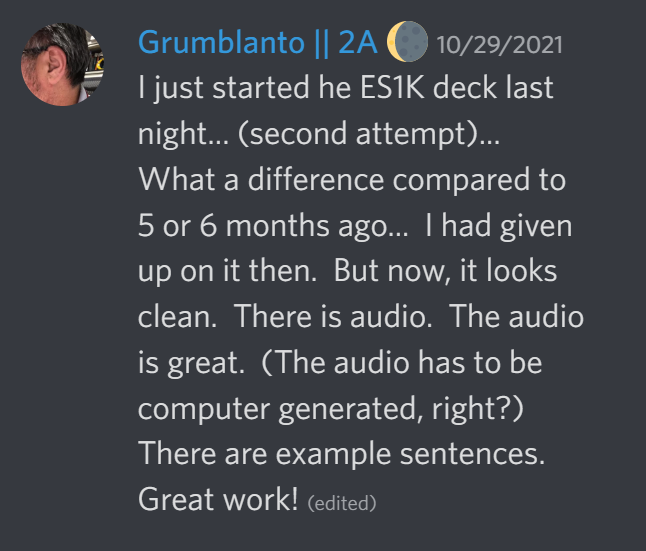 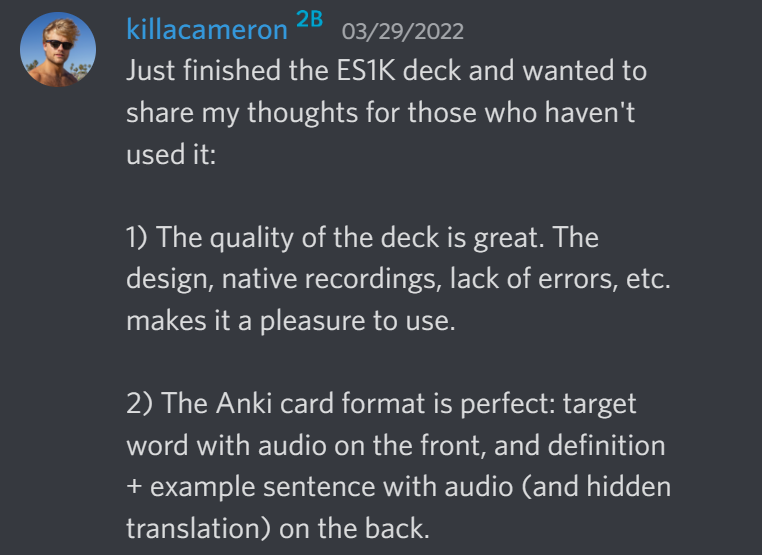 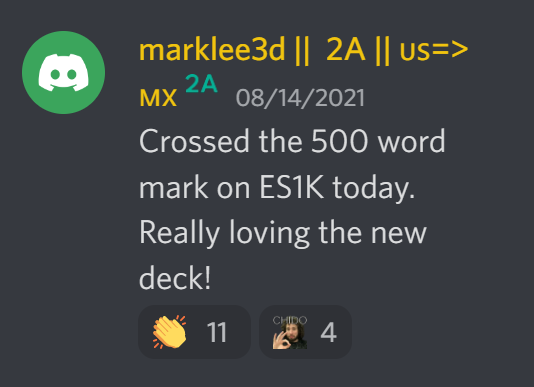 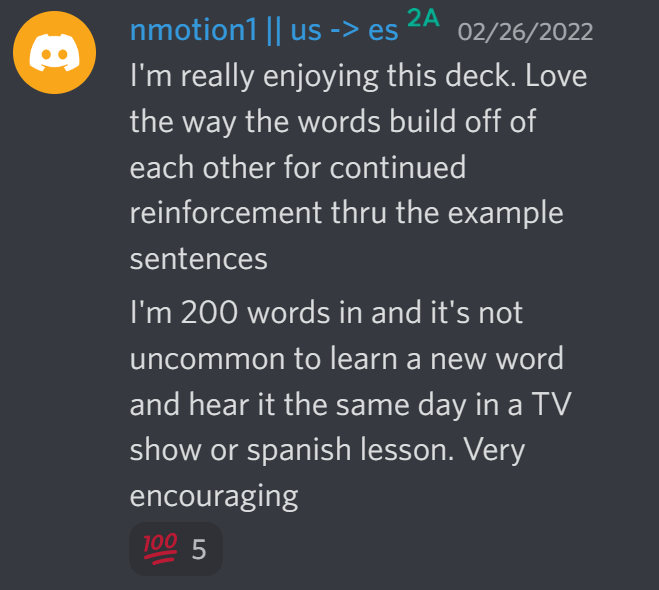 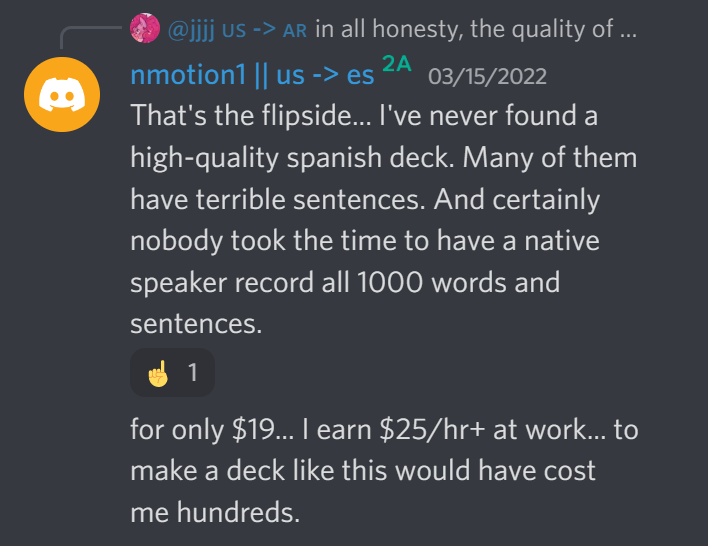 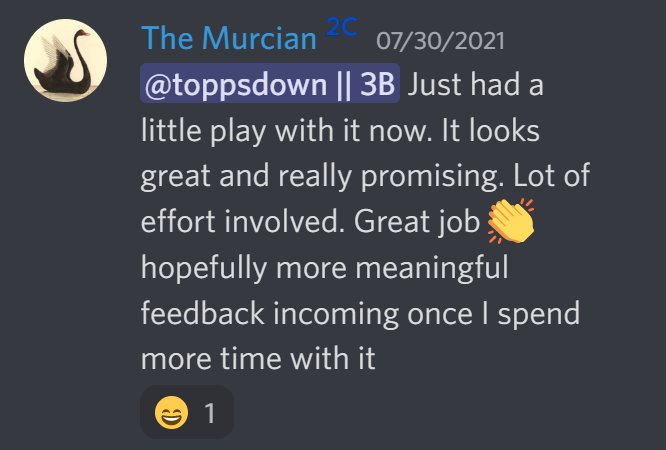 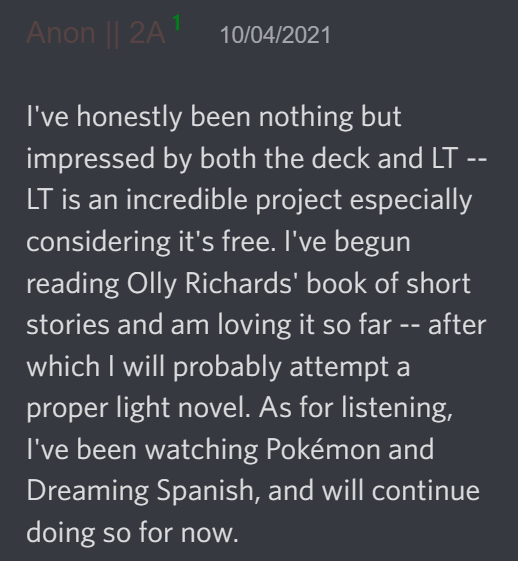 Couldn't I build my own vocabulary deck?

Sure. You could spend dozens of hours building your own deck and then hire a native speaker to record the audio for you. But why would you? We've already done all the hard work to save you that time.

Why shouldn't I just use Duolingo?

Duolingo is great if you just want to dabble in a language, but it's slow and the example sentences are… weird. (Looking at you "Whose robot ate my cake?").

You'll only learn a few words per day and you won't hear how those words are actually used in real life.

If you just want to dabble in Spanish and aren't ready to commit, then no worries. We'll be here whenever you're ready.

Doing flashcards is the least fun part of language learning. Our goal is to give you a shortcut to understanding native media so that you don't have to waste your time flipping through thousands of poorly made flashcards with computer-generated audio that doesn't sound anything like a native.

Will this make me fluent?

NO! Vocabulary is just one piece of the language learning puzzle. You also need to study grammar and listen to Spanish media so that you can learn to recognize and understand the words.

Check out our quickstart guide for grammar and media recommendations.