Comprehension cards prompt you with a chunk of language, and your job is to understand it. You might be shown a word, a phrase, or a whole sentence. The back of the card would have information that allows you to check your understanding.

In the Refold method, the role of the SRS is to help you understand more of your immersion, not to help you produce the language yourself. Remember, the ability to speak and write your TL results from acquisition, which comes from comprehending your immersion.

Therefore, all cards that you make when sentence mining will be comprehension cards, not production cards.

Card formats are differentiated by what you put on the front of the card. This is the important part because it’s what you are testing yourself on. The back of the cards is much less important. Its purpose is to help increase your understanding of what is on the front.

The front of cards can feature either an audio recording or written text. Never put both the audio and text form of a sentence on the front of a card. You wouldn’t be truly testing your listening ability or your reading ability. 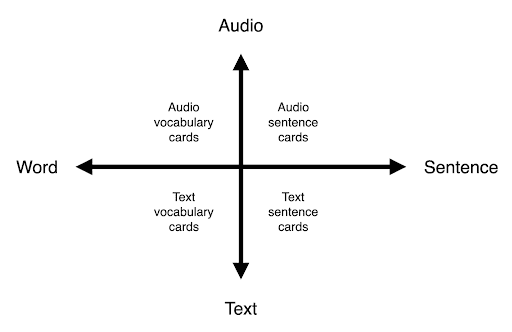 The four card formats have unique pros and cons. Experiment with all four to get a feel for the benefits. You may settle on one or two formats that work best for you, or continue to use all four. You may also find that certain formats are more or less useful depending on what stage of the language learning process you’re at.

The front of the card consists of an audio recording of the sentence. This audio will typically be taken from a show that you are watching, but can also come from any other source, as long as the sentence is spoken by a native speaker.

The back of the card should have at a minimum:

You can also add other things to the back of the card that will help you understand it better. For example, you might add a screenshot of the scene that you mined the sentence from.

For audio sentence cards, it’s crucial to choose sentences where you can hear the target word clearly. Training your listening comprehension on a clearly spoken sentence will let you understand mumbled ones; the opposite is not true.

If you find a sentence you really like but that is too blurry to use for an audio sentence card, use one of the other formats. You can always put the audio sentence on the back of the card.

Audio sentence cards primarily train listening ability, but because the written form of the sentence is on the back, they help you develop your reading ability as well.

The biggest drawback of this card format is that it creates highly context-dependent memories. The audio recording will have a huge number of clues and artifacts: the intonation, pauses, the pacing of the sentence, the actor’s voice, background noises, and music. You’ll also remember the scene that the audio clip was taken from, and perhaps even the emotional reactions that you had while watching the scene. Your memory of the meaning of the sentence will often be tied to these elements. You’ll be able to easily understand the sentence when reviewing the card, but sometimes you won’t be able to recall the target word’s meaning when you come across it in your immersion. Occasionally you won’t even recognize it as a word that you have a card for.

Since making audio sentence cards requires capturing audio, and because the requirements for the clarity of the audio are so stringent, it can sometimes be difficult to find suitable sentences for this card format.

When grading yourself, pass the card if you understand the meaning of the sentence when you hear it. It’s fine to replay it two or three times. If you still don’t understand it, fail the card so that you will see it again sooner.

The front of the card consists of the written form of a sentence.

The back of the card should have at minimum the definition of the target word.

Don’t put pronunciation hints on the front of the card, whether that is IPA or a phonetic transliteration (e.g. romanization, pinyin, furigana, etc).

Text sentence cards are quick to make and very natural to review since the target word is embedded in a context that helps make the meaning of the word clear. Having the target word used in a sentence also helps you internalize the usage of the word.

That said, this context can also be a disadvantage, because sometimes you remember the meaning of the sentence as a whole, and become unable to recognize or understand the target word in other contexts.

In the beginning, when your reading ability is completely undeveloped, reviewing text sentence cards can be quite mentally taxing because you have to read a whole sentence. This can reduce your overall study capacity during a review session.

When grading yourself, pass the card if you understand the meaning of the sentence when you read it. Otherwise, choose “again” so that you will see the card again sooner.

The front of the card consists of an audio recording of the target word spoken by a native speaker.

The back of the card should have at a minimum:

The example sentence for an audio vocabulary card doesn’t have to be strictly 1T. Since you’re testing your understanding of the word in isolation on the front, there won’t be any memory interference from unknown elements in the sentence on the back.

Audio vocabulary cards primarily train listening ability in a way that is less context-dependent than audio sentence cards. This tends to help you recognize and understand the word more reliably in your immersion. This lack of context is also the card format’s largest disadvantage: it can make the word harder to learn in the first place. It can also make the card more awkward to review, because the lack of context means that you often end up spending more time performing a search pattern against your memory, trying to attach the word to the correct meaning.

Audio vocabulary cards train reading ability to some extent, but it’s not their main strength.

When grading yourself, pass the card if you understand the meaning of the target word when you hear it. Otherwise, choose “again” so that you will see the card again sooner.

The front of the card consists of the written form of the target word.

The back of the card should have:

Don’t put pronunciation hints on the front of the card, whether that is IPA or a phonetic transliteration (e.g. romanization, pinyin, furigana, etc).

Text vocabulary cards are easy to make, and generally quick to review. However, having the word tested in isolation can make it harder to learn and can make review awkward because the unit of meaning is so small that it can be difficult to attach the word directly to the concept it corresponds to. As a result, it may take more time to review these cards than cards with a sentence on the front, because you spend a lot of time thinking about the word and making connections to the meaning.

Since text vocabulary cards have an example sentence on the back, they still provide enough context to build an understanding of the word and its usage. This sentence doesn’t have to be 1T, as it is simply providing additional context after your recall has been tested. Therefore, there’s no concern about memory interference.

When grading yourself, pass the card if you understand the meaning of the target word when you see it. Otherwise, choose “again” so that you will see the card again sooner.

If you have audio on the back of the card, you can also grade yourself on reading the correct pronunciation.

Don’t make multiple cards for the same meaning of the same word.

If a word has multiple meanings, then use separate sentence cards for the different meanings, since the word in isolation is not enough to differentiate the meanings.

For each word you learn, choose the card format you think will help you learn it the best. You can transition a card from one format into another at any point in a card’s life.

Be careful not to put additional clues and context (e.g. images) on the front of cards, as this can lead to creating memories that are reliant on that additional information. This makes it less likely that you will understand the target word when you come across it in your immersion.

Having a picture on the back can help create stronger memories. It’s especially useful to have a picture for cards where the target word is a noun. In these cases, a picture can be more helpful than a definition.

An advanced sentence mining technique is to use software to automatically create flashcards from videos with subtitles. This creates a large “sentence bank”, which you can then use to select cards to study, either by searching for words that they want to learn and sifting through the resulting sentences or by using software that automatically prioritizes cards to learn based on a frequency list.

Here are some useful tools for automated sentence mining: